Since our MiniDisc software is subject to ongoing development, it is highly desirable for the users to always have the latest version installed to be able to benefit from the latest updates in the software.

The most popular software updaters include

As mentioned before, Linux and most other Unix derivatives already include a package management system which takes care of periodic updates and thus there is no additional update management within the application necessary. In fact, all popular cross-plattform applications like Firefox or Google Chrome that provide an integrated update mechanism through a menu option, have this option disabled in their Linux versions since the package manager already takes care of it. Thus, we will concentrate on integrating automatic updates into the software application on MacOSX and Windows only.

In order for the automatic updates to properly work, they need to be able to determine the version of the currently installed instance of the software package. The version number is commonly defined as a three-digit, dot-seperated number in the pattern: x.y.z where x denotes the major, y the minor and z the patch level version.

The first version of a software package is therefore usually denoted as 0.0.1, which is also the case for qhimdtransfer. However, since the software is still under heavy development, we haven't made any official releases yet and are never increasing the version number up to now. In order to be still able to track any changes in development and thus updates, we can leverage the (abbreviated) hash of every individual commit which git creates. The hash for the current commit can be determined with git describe:

The parameter ”–always” when no tags are defined, i.e. version numbers. But since we want human-readable version numbers, we will simply use tags in future to define these and call git describe to read the full tag from git and display it in the about dialog as shown below.

An updated about dialog displaying the version should look like this mock-up: 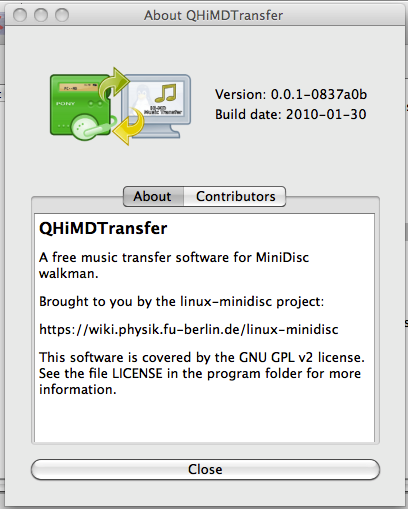 Automatic Updates for QHiMDTransfer on MacOS

We will be using Sparkle

Automatic Updates for QHiMDTransfer on Windows

We will be using WinSparkle

Except where otherwise noted, content on this wiki is licensed under the following license: CC Attribution-Noncommercial-Share Alike 4.0 International